NASA is embracing new paradigms in exploration that involve expanding our knowledge and leveraging resources as we extend our presence into the Solar System. Space pioneering and prospecting towards independence from Earth are necessary steps to achieving NASA’s goal of extending humanity’s reach into space.

Recent discoveries of what are thought to be large ice deposits under both lunar and Martian surfaces have mission planners re-thinking how sustained human presence on the Moon and/or Mars could be enabled by a “water rich” environment. Water is essential to enabling a sustained presence, as it could enable agriculture and propellant production, reduce recycling needs for oxygen, and provide abundant hydrogen for the development of plastics and other in-situ manufactured materials. Before the water can be used to support sustained human presence, it must be extracted from the ice deposits. However, getting to the water will be a formidable task due the variety of layers that can be encountered on top of that ice. The composition, density, and hardness of each of these layers presents different drilling challenges, and it is crucial that we develop systems that can identify different layers and understand what modifications need to be made to mine through them in order to reach the ice. The purpose of this challenge is to explore and demonstrate methods to identify different layers using system telemetry, and ultimately extract water from lunar or Martian ice deposits. 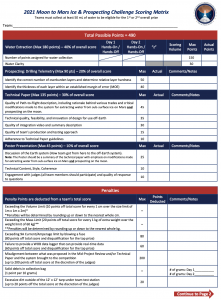 Participating team members take on the role of astronauts who monitor and control drilling operations. Using a combination of remote control and hands-on operations, teams will extract as much water as possible from the buried ice. In order to demonstrate a wide range of capabilities of interest to exploration and science, team member interaction with the prototype will be divided into a period where “hands-on” operation and repairs are permitted and a period where physical “hands-off” operations will take place. During all phases of the competition, the teams will be able to use a control system to operate the water extraction system.

Through the RASC-AL Special Edition: Moon to Mars Ice & Prospecting Challenge, NASA will provide university-level engineering students with the opportunity to design and build prototype hardware that can extract water and assess subsurface density profiles from simulated lunar and Martian subsurface ice. Multiple teams will be chosen through a proposal and down-select process that assesses the teams’ concepts and progress throughout the year.

Up to 10 teams will become finalists and travel to the NASA Langley Research Center (LaRC) in Hampton, VA during the summer of 2021 to participate in a multi-day competition where the universities’ prototypes will compete to extract the most water from an analog environment simulating a slice of a combined lunar and Martian surface, while simultaneously using system telemetry to distinguish between overburden layers and create a digital core of the various layers. Each simulated subsurface ice station will contain solid blocks of ice buried under various layers of overburden (terrestrial materials of varying hardness that represent possible materials found on lunar or Martian surfaces). Teams will be asked to provide a digital core that represents their knowledge and understanding of where each of the overburden layers are, the general hardness of each different layer, and the thickness of each layer. The total internal depth of the simulated testbed will not exceed 1.0 meter. Teams may drill multiple holes. The water extraction and prospecting system is subject to mass, volume, and power constraints.

In addition to the test and validation portion of the project, teams will present their concepts in a technical poster session to a multi-disciplinary judging panel of scientists and engineers from NASA and industry. Poster presentations will be based on the team’s technical paper that details the concept’s “paths-to-flight” (how the design can be modified for use on an actual mission on the Moon or Mars). This includes, but is not limited to, considerations for temperature differences, power limitations, and atmospheric pressure differences.

The paths-to-flight description will be broken into two distinct sections:

Based on initial proposals, up to 10 qualifying university teams will be selected to receive a $10,000 stipend to facilitate full participation in the competition, including expenses for hardware development, materials, testing equipment, hardware, software, and travel to Langley for the competition. Final Scoring will be based on total water extracted and collected each day, the accuracy of the digital core, adherence to NASA requirements, a technical paper capturing paths-to-flight, innovations and design, and the technical poster presentation.

Top performing teams may be chosen to present their design at a NASA-chosen event. Subject to the availability of funds, such invitations may include an accompanying stipend to further advance development of team concepts and to offset the cost of traveling to the event.

Covid-19 Statement: As the coronavirus (COVID-19) situation continues to evolve, NASA and NIA will closely monitor and follow guidelines from federal, state, and community officials regarding the onsite competition at NASA LaRC next summer. Protecting the health and safety of team members, staff, and judges is our primary priority.

*The digital core should result from information garnered using system telemetry and not via placing a ruler down the hole. Teams may not touch the layers to determine hardness. 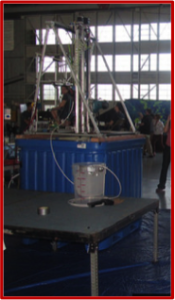 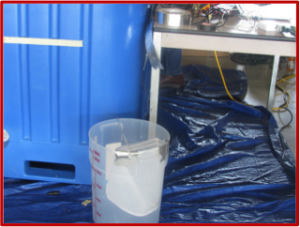 During the on-site portion of the competition, each team will be provided with their own workstation, which will include workbench style tables, chairs, wastebasket, and a test station with the simulated Martian/lunar subsurface ice. A lid/mounting platform with open access to the simulated overburden and subsurface ice will be located directly on top of the test station; this platform will be a staging area for the prototype system. 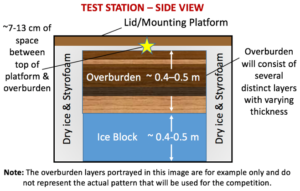 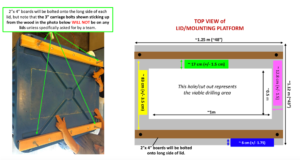 The Moon to Mars Ice & Prospecting Challenge Forum will be held inside Langley's Hangar facility. This is a well ventilated, shaded environment, but it is open to the outdoors when the hangar doors are open. Please keep in mind that temperatures average close to 30⁰ C in Hampton, VA during June, generally with high humidity. The test beds are well insulated and will utilize enough dry ice to keep the ice in a solid, frozen state throughout the entire competition.

Dealing with ice at these atmospheric conditions is non-trivial. Teams are encouraged to carefully consider thermal management in the design and operation procedures. During this indoor competition, teams can expect that the simulated Martian subsurface ice will have non-uniform temperature. Teams should assume that the atmospheric temperature is going to be between 25-35 °C; the overburden will have a gradient from 20° C at the surface to -10° C at the ice interface.

Prior to the first official competition run, teams will have approximately 8 hours to set up their water extraction system, undergo inspection (safety, volume check, weigh-in, etc.), and conduct mechanical, electrical, communications, and integration testing. No actual drilling/water extraction/prospecting will be allowed during set up.

On the final day of the on-site competition, teams will have the opportunity to participate in small challenges designed for teams to showcase their systems’ unique capabilities. While participation in these challenges is completely voluntary and they do not count toward the overall score, they do provide the opportunity for systems to show-off. Certificate awards will be presented for the winner of each subsystem demonstration category during the Awards Ceremony. During the subsystem demonstrations, teams can operate in hands-on mode.

Subsystem Demonstrations May Include the Following Challenges:

More information about the subsystem demonstrations will be made available to the finalist teams.

University Design Teams Must Include:

Because this is a NASA-sponsored competition, eligibility is limited to students from universities in the United States. Foreign universities are not eligible to participate in the Moon to Mars Ice & Prospecting Challenge.

RASC-AL Program staff are only able to respond to questions presented by eligible students and faculty from accredited colleges and universities in the United States.

Teams selected to participate in the on-site Forum will be responsible for the following Project Deliverables:

The Moon to Mars Ice & Prospecting Challenge Steering Committee is comprised of NASA experts who will evaluate and score the competition between participating teams. Moon to Mars Ice & Prospecting Challenge projects will be evaluated and judged based on adherence to the Design Constraints and Requirements and the 2021 Final Scoring Matrix.
The 2021 Final Scoring Matrix provides a detailed explanation of the scoring approach.

Teams are responsible for thoroughly reviewing the Design Constraints & Requirements as well as the guidelines for each deliverable to ensure compliance.

Final scores will be determined based on the following categories:

Note: To be eligible for 1st or 2nd overall prize, teams much collect at least 50 mL of water.

Each finalist team will receive a $10,000 stipend to facilitate full participation in the competition, including expenses for hardware development, materials, testing equipment, hardware, software, and travel to Langley for the competition.

Stipends will be awarded to the finalist teams in two phases. The first half of the $5,000 stipend will be sent immediately after selection notifications in December so that teams may begin development of their prototypes. Each finalist team will receive the second $5,000 stipend installment only after successfully passing their mid-project review in March.

Moon to Mars Ice & Prospecting Challenge stipends may not be used to:

Awards may be given for the following: